RVA Has Talent Program at the Richmond City Jail 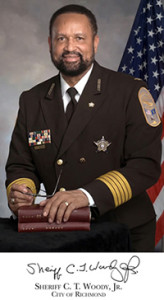 Richmond, Va — Sheriff C.T. Woody, Jr. will host a talent show for jail residents on Friday, December 13, 2013, beginning at 12:45 p.m. in the resident dining hall of the Richmond City Jail. The winner of the program will receive more than a blue ribbon; they will receive a job offer from a local businessman after they get out of jail.

In October, Sheriff Woody held the first Career Professional Speaker Series at the Richmond City Jail. Its purpose: to help better prepare jail residents who needed assistance in finding gainful employment, and maybe a career, post release. Richmond comedian and entrepreneur Micah White was one of the three kick-off speakers. White’s discussion focused on creating talent into a business and the importance of making sure a portion of business finances cycle back through the community.

As a response to White’s discussion on using God given talents to excel in life, an intense four-week job preparation program was created through a partnership spearheaded by the Richmond City Jail, Micah White, and RVA Has Talent. This program was developed as a means to help gauge and further develop a jail residents talents, in the hope of preparing them for a career which could utilize them.

Through collaboration with Hyrell and Haley Buick-GMC we were able to develop an intense job preparation course for interested residents. Classes met several times over the four week period and even provided coaching on how to obtain a job, which would meet their financial obligations upon release. Hyrell Online Recruiting Software and their co-founder and co-owner, John Guzak, provided expertise and guidance on completing complex job applications. They donated services, allowing residents the opportunity to complete an application through the Hyrell system, which is also used by many employers in our community, including Haley Buick-GMC, Fast Signs, and UPS. All participants received feedback and critique on their applications.

Participants were also required to develop a cover letter and resume for a job they will likely apply for after release, as well as develop a business plan for utilizing their talent and starting their own business. Business plans included a mission statement, objectives, and financial and budget plans. They created elevator speeches, as to be prepared for a job interview or to present themselves should they have an opportunity to meet with someone of influence in a business or marketing setting. The ‘elevator speeches’ were performed by participants to Barry Moore, General Manager at Haley Buick-GMC and LeVar Person, Service Manager at Haley Buick-GMC. Moore and Person provided feedback and critique in order for each resident to better prepare for the business world.

After completing the course and all its required work, residents will be permitted to participate in the RVA Has Talent in Jail Show, Friday, December 13 at 12:45 in the resident dining hall at the jail. Performances will include gospel music, hip-hop, poetry, comedy, and art. Before each performance, participants must introduce themselves and also give their own ‘elevator speech.’

The winner will have a unique talent, an intense desire to succeed, fierce determination, and the sheer will to make a significant life change. They will have a passion and aptitude for business, which will have previously been displayed through the cover letter, resume, job application, business plan, and class participation. He/She will have a unique talent that is of interest to the general public. The aspiring entertainer will also have strong verbal and written communication skills, a pleasant and inviting personality, a high degree of integrity, and the understanding that success in this business has more to do with preparation than performance.

The winner of this show will be hired by White upon their release and will have an opportunity to have their own performance at the Speak Easy. They will receive coaching by White and other professional performers and entertainers from Richmond.

Media is invited to attend all or portions of the performance. Sheriff Woody and Micah White will be available for interviews before the show begins.

About RVA Has Talent:
RVA has Talent was created in 2013 by Micah “Bam Bamm” White to represent a unity of talents, charities, and community through initiatives that cultivate long last relationships and unforgettable experiences. The mission is to bring together non-profits and talents into one brand that generates community support through entertainment and philanthropic initiatives.