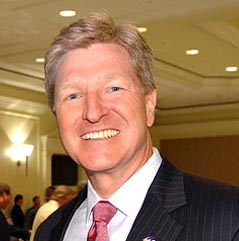 The Washington Post
By Laura Vozzella and Ben Pershing
Friday, December 13, 8:44 AM

RICHMOND — Virginia Gov.-elect Terry McAuliffe has chosen Brian Moran, a one-time political rival and state party chairman, to be his secretary of public safety, according to two people familiar with the decision.

McAuliffe is scheduled to announce the appointment Friday morning in Arlington, where Moran, 54, served for seven years as a prosecutor.

His transition team declined to comment on the public safety appointment in advance of the announcement in Arlington. Moran, the brother of U.S. Rep. Jim Moran (D-Va.), did not respond to messages seeking comment.

A state delegate for 12 years, Brian Moran served on the courts of justice committee, was a member of the state crime commission and served on the Secure Virginia panel formed in response to the terrorist attacks of Sept. 11, 2001.

Two people familiar with the decision confirmed Moran’s selection, speaking on condition of anonymity in order to discuss a still-private matter. The appointment was first reported by the Richmond Times-Dispatch.

McAuliffe and Moran were rivals in the governor’s race four years ago, when they lost the Democratic nomination to a third contender, Creigh Deeds (D-Bath). Deeds went on to lose the general election to now-Gov. Robert F. McDonnell (R).