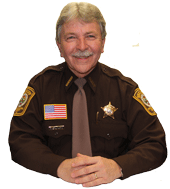 Spotsylvania, VA – The Spotsylvania Sheriff’s Office is hosting its 2nd Annual Operation Blue Christmas during the holiday season. The celebration has three phases:

First Phase – Stuff a Cruiser took place on December 6, 13, and 14 took place at Spotsylvania Towne Center, Spotsylvania Kohl’s, and Spotsylvania Wal-Mart. We asked the public for clothing and toys donations. Shoppers stopped by both parked cruisers and the command center bus to donate cash, gloves, coats, hats, toys, food, and more. The generosity and outpouring from the citizens of Spotsylvania was monumental.

Second Phase – On December 18, almost 200 children from Spotsylvania County who were identified as “less fortunate,” were invited to the Public Safety Building for Winter Wonderland. They were given snacks and coloring book exercises until their turn to meet Santa and Mrs. Claus. At that time, all children were matched with new coats, gloves, hats, and toys.

Third Phase – Shop with a Cop will take place on Saturday, December 21. Deputies will take 30 children and 10 elderly residents Christmas shopping. Money has been donated by several area businesses as well as donations from Cover the Cruiser at Spotsylvania Towne Center and from shoppers at Wal-Mart. This crucial phase of Operation Blue Christmas will allow these children and the elderly to select some much needed clothing and/or other items for their Christmas celebration.