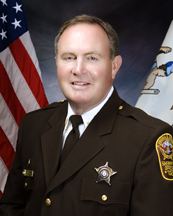 Yes, Virginia Beach, there is a new-thinking sheriff
By Kathy Adams
The Virginian-Pilot
December 30, 2013
http://hamptonroads.com/2013/12/yes-virginia-beach-there-newthinking-sheriff

When he ran for sheriff in 2009, he pledged to lock up dangerous criminals while saving taxpayers money. Adding programs to reduce recidivism wasn’t on the menu.

“The sheriff is not a social worker,” Stolle told voters.

But in the four years since he became sheriff, his resume – and his mindset – have changed.

Stolle still believes that criminals should be punished, but he also thinks they need hope and resources to help them avoid repeating their mistakes. He no longer thinks mandatory minimum sentences are such a good idea. He believes jailers have to provide social services, especially mental health and substance abuse treatment, even though it’s not really their job. He wants to help former inmates find housing and employment.

The change is seen in the way he runs his jail, in the programs he’s advocating and in the initiatives he plans to take soon to the legislature in Richmond.

It’s a shift some other prominent Virginia Republicans are making, too, said Quentin Kidd, a political science professor at Christopher Newport University, who points to downward crime trends, budget realities and tragedies such as the Sandy Hook massacre that have shifted the focus to mental health.

“I don’t think Ken Stolle is unique as a Republican officeholder,” Kidd said. “I think he’s really reflective of a larger trend.”

While he supported increasing penalties for repeat drug offenders and rapists, Republican Gov. Bob McDonnell has focused on prisoner re-entry programs and restored civil rights to more nonviolent felons than any of his predecessors.

And Republican Attorney General Ken Cuccinelli has said it’s time for a change.

“How many times have I seen my fellow ‘tough on crime’ conservatives be not merely willing, but excited, to lock up every convict and throw away the key?” he said in a speech in March. “We need to stop throwing away that key. Conservatives should lead the campaign to changing the culture of corrections in America.”

It’s not uncommon for sheriffs to change their policy positions after spending some time in their jails, said Chesapeake Sheriff Jim O’Sullivan, who also is a Republican. He too is looking to improve mental health services, and in August he launched a program for inmates to help them learn to reunite with family and find jobs and housing.

Stolle’s point of view has evolved over decades.

Stolle had never planned on going into politics, but 11 years as a police officer changed his mind.

He joined the Virginia Beach Police Department in 1976, eventually working narcotics and SWAT. He earned a reputation as a tough cop who worked through broken bones, killed a pit bull with a machine gun and was sued at least twice for excessive force, and cleared.

One night in particular influenced him. During a search at a home in Green Run in the 1980s, a suspected drug dealer opened fire. A bullet just missed Stolle and hit another officer in the head. He survived only because of his new ballistics helmet.

A judge sentenced the shooter to 10 years in prison, but he was eligible for parole in three.

“That was the straw that broke the camel’s back,” Stolle said. Police and prosecutors had done their jobs, but “we didn’t have the will in Richmond to pass the laws that needed to be passed.”

So Stolle read law, passed the bar exam, went into private practice and, in 1991, won a Virginia Senate seat.

At the time, drugs and illegal firearms were making incidents like what happened during the raid in Green Run more and more commonplace in Virginia and the rest of the country. Crime spiked, and Virginia’s legislators responded by instituting mandatory minimum penalties for gun crimes, limiting firearm purchases to one per month and ending parole. Stolle championed many of those efforts.

The initiatives worked, he said, with crime sinking to its lowest level in Virginia in 40 years. In the decade after the General Assembly ended parole, per capita violent crime in the state fell more than 20 percent, according to FBI statistics.

From the inside of the Virginia Beach Correctional Center, Stolle now looks at those crime initiatives differently.

He makes his rounds about twice every week, chatting with some of his 1,400 inmates and taking complaints about clogged shower drains and coffee prices and, from some, why their sentences are so long.

In many cases, the answer is standing right in front of them.

“I probably arranged for half of the jail time that they’re serving,” Stolle said. “A lot of the guys don’t know I was a senator, and it probably works out better that way.”

He stands behind his work in the Senate but says that system is no longer working.

“I see every day the impact of what I did as a legislator,” he said. “And I think we were right in what we did, but we’re airtight, and sometimes I think there needs to be an escape valve in the criminal justice system.”

Stolle wants to change sentencing to give more discretion to judges, but he knows most legislators won’t support repealing mandatory minimum sentences for fear of looking soft on crime.

Instead, he has proposed a sentencing arrangement in which inmates serve the first year of their sentences in the city’s jail, which then generates a report on their behavior during that time. They then go back before a judge, who can use the report to alter their sentences before they transfer to prison.

State officials have said the change won’t require General Assembly approval, and Stolle has been in talks with the city’s judges about implementing it next year. The proposal has put him at odds with his brother, incoming Commonwealth’s Attorney Colin Stolle, who thinks changing sentencing would be unfair to crime victims.

Ken Stolle also wants to make it easier for inmates to stay out of trouble after their release and has asked members of the Senate Finance Committee to find funding to create halfway houses attached to jails.

That would help inmates such as one who came to Stolle this month. He said he has violated his probation six times and is scheduled to get out of jail again in April. But he has no family, nowhere to go and no reliable way to get to job interviews and meetings with his probation officer.

He wanted to know whether there were any resources to help with those things. Stolle had to tell him no.

Halfway houses would help, giving people a place to stay and someone to be accountable to, Stolle said.

He wants to help inmates’ families, too, possibly by creating a recreational athletic league for children with a parent behind bars.

He already has created separate jail units for mentally ill and suicidal inmates, added social workers and eliminated use of the dungeonlike isolation cells that used to house the mentally ill.

“He seems to be ahead of the curve,” said Kay Ashby, president of the Virginia Beach chapter of the National Alliance on Mental Illness. “He is proactive. He understands that this is a population that shouldn’t be in jail but sometimes they have to be because of the offense they’ve committed.”

Stolle said his views changed after working with inmates and deputies alike.

“When I got in here and I got exposed to the problems personally … I realized there’s more that we can do,” he said. “The sheriff doesn’t have the resources to be a social worker or a mental health worker, but we’re forced to do that.”