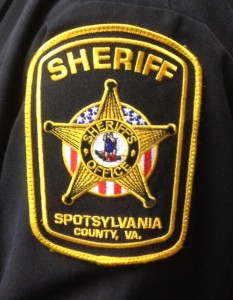 On June 23, 2013, a call came out for a drive-by-shooting at a residence in Spotsylvania County. Sergeant Franklin Belcher and Deputy Dillon Tittle were the first two units on scene. A neighbor pointed them in the direction of a townhome. Sergeant Belcher and Deputy Tittle noticed four bullet holes in the door as they approached the residence. Not knowing if the shooter was in the residence, they waited for other units to arrive. Deputy Mark Friedman and Deputy Lucas Spillman then arrived on scene, and they approached the house to check for injuries. As Deputy Tittle tried to open the door to make an announcement, the door was obstructed, and he noticed the victim lying directly behind the door. Deputy Tittle was able to gain access through the front door. Units performed a quick sweep of the residence and immediately began rescue attempts for the victim who was lying in a large pool of blood. Deputy Tittle pulled the victim away from the doorway so he could accurately check for a pulse. When no pulse was detected, Deputy Tittle began chest compressions. Deputy Tittle completed over 60 chest compressions when the victim started to breathe and moved his left hand. Deputy Setlock also arrived on scene during this process and was assisting Deputy Tittle along with Deputy Friedman. The three deputies then started checking for wounds and maintaining an open airway on the victim. During their checks they noticed that the victim had been shot three times, once in the left arm just below the shoulder, once near the right collar bone, and once under the left ear. Sergeant Belcher was looking for items to use as dressings and found t-shirts lying on the couch, which he gave to Deputy Tittle and Deputy Friedman to place over the wounds to try and control the bleeding. Deputy Setlock in the meantime was cutting away clothing to look for any other wounds. The hole under the left ear was large and bleeding profusely. Deputy Tittle stuck his thumb in the wound to slow down the bleeding. No other wounds were noticed at this time. Rescue units arrived on scene, but Deputies Tittle, Friedman and Setlock continued their efforts and assisted rescue units by placing the victim on a backboard and then on the stretcher for transport to Mary Washington Hospital Trauma Center. Due to the quick actions of Sergeant Belcher, Deputy Tittle, Deputy Friedman, Deputy Setlock, and Deputy Spillman, the victim in this shooting survived the ordeal and is still alive today. He is working with detectives to identify his assailants.