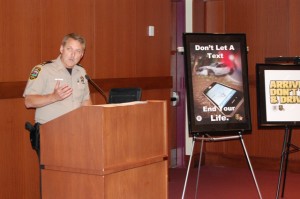 The Loudoun County Sheriff’s Office (LCSO) and Loudoun County Public Schools (LCPS) were recognized at the 2014 Governor’s Transportation Safety Award for Youth Traffic Safety in the Commonwealth of Virginia for their joint campaign on the dangers of texting-while-driving.

The LCSO and LCPS were presented with the Youth Traffic Safety award at the State Capitol in Richmond, Virginia in June. This award is presented for programs that educate youth on the importance of youth traffic safety.

“By involving Loudoun County Public School students to help get this message out, we made sure to take the issue right to those who are more likely to be involved in this dangerous activity. The message developed for the campaign remains clear, don’t let a text end your life,” said Loudoun County Sheriff Mike Chapman. 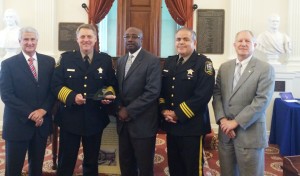 The in-school public awareness campaign regarding the dangers of texting and driving was unveiled just prior to a new texting-while-driving law that went into effect in Virginia in July 2013. The law made texting while driving a primary offense and significantly raised fines.

The winning messages, Arrive Alive Don’t Text & Drive and Don’t Let A Text End Your Life, were distributed in all fifteen high schools within Loudoun County and reached over 11,000 students.

The graphic communications students at MTC created posters that would show their peers the dangers of texting while driving. Students from the first and second-year graphic communications classes submitted ideas to the Sheriff’s Office and three designs were selected. The Graphic Communications Department produced all of the products. The cost of the materials was offset by a Justice Assistance Grant (JAG) for the Community Traffic Safety Management Program from the Commonwealth of Virginia Department of Criminal Justice Services.