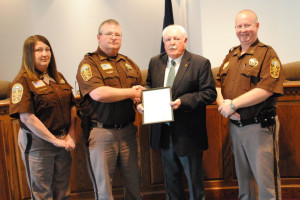 Along with the LHS inspections of 2009, 2011, 2012 and the three year audits of 2010 and 2013 this is the Charlotte County Jails’ sixth consecutive 100% compliance rating from the Department of Corrections.

In attendance for the recognition on behalf of the Sheriff’s Office were Captain Keith Lockridge, Lieutenant Melissa Tharpe, and Sergeant Timmy Dix. Captain Lockridge would like to thank the Charlotte County Board of Supervisors. A special thanks also goes out to Sheriff Thomas D. Jones for the recognition and the support he gives the jail.