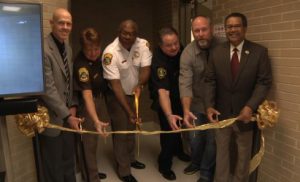 Newport News Sheriff Gabe Morgan, flanked by staff and city officials, cut the ribbon last Friday for a new, state-of-the-art booking area and other renovations to the first floor of the Newport News City Jail.

The booking area has more fingerprint stations, holding cells and body scanners that are already paying off.

“Just this week, we found a handcuff key from a prisoner who came from another facility. We patted him down, we searched him, and in the way he had it concealed, it was very hard for a human being to find it. However, once he got on that scanner, it lit up like, like it was daylight,” Sheriff Morgan explained.

The nearly $2 million renovation work began in February 2015, although planning began a couple of years before that. 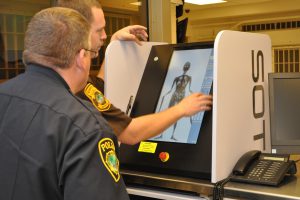 Other improvements include an additional covered sally port for police dropping off suspects and a public waiting area with seating, bathrooms and vending machines.

The renovation also required moving the Magistrate’s Office out of the jail and into one of the courts buildings.

It’s change for the better, Sheriff Morgan says. “We have a more efficient system to return officers back to the street to their duties of protecting the city and then it’s also helping us to ensure the safety and control of the inmates that we’re charged to take care of.”